Seventh-quarter stocks took a momentary plunge today when Bartholomew Trundle, CEO of ZokCo, Inc., was eaten by an unpaid intern. The incident occurred at Zok Headquarters in Crating just after the 10:05 break. 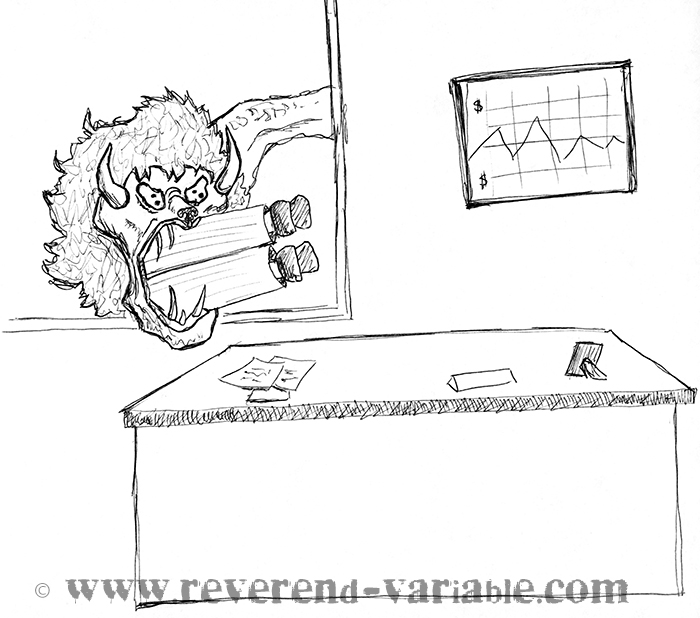 “I warned him!” wailed Mr. Trundle’s assistant, Blasfemie Cook, as a janitor removed her former employer’s remains (one knee-cap and a brown leather loafer) from his office. “I warned him that the job market was getting vicious. But he just kept telling us to take on college grad students. He told HR to promise that the experience would look great on their resumes. He always figured that a pizza party once a month would be enough to keep them happy. It’s not. It’s just not.”

The intern in question, Trevor Waddlesnatch, confirmed Ms. Cook’s worries. “Don’t get me wrong,” he said, picking a morsel of Mr. Trundle out of his fangs. “Free pizza is never a bad thing. But at some point, you know, you just have to stand up and ask for what you want. My academic counselor at GXU told me that I should try to be more assertive, and I think I really got my point across today.”

Shareholders’ worries were assuaged by lunchtime, when a Zok spokesperson announced that Ms. Cook would be immediately promoted to Mr. Trundle’s former position. Her first order of business was to give Waddlesnatch a paid position and his own cubicle.

“Drawers!” he exclaimed gleefully. “My new desk has drawers! That’s exactly what I wanted! Wow! This being-assertive thing really works. Look, there’s even room for a potted plant.”

Moving forward, Cook has some ambitious plans. “We’re going to phase out the internship programs as quickly as possible,” she said. “Free labor just isn’t worth the karmic debt. Any shareholders who have questions about this plan should make an appointment with the head of our new Shareholder Satisfaction Team, Trevor Waddlesnatch.”

Be the first to comment on "Shareholders Cheer Zok Inc.’s New Hiring Paradigm"